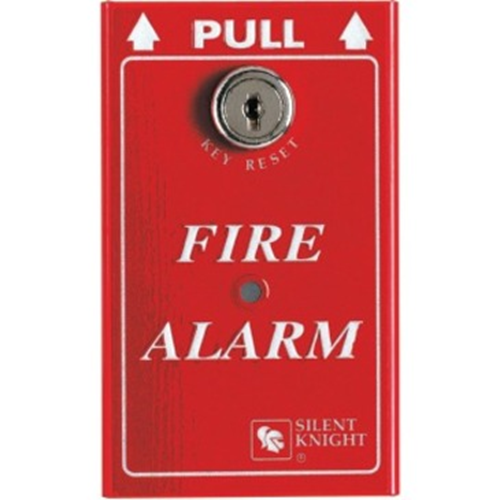 The SD500-PS and SD500-PSDA are a single action or dual action addressable manual fire alarm pull station for use with Silent Knight's IntelliKnight fire control panel. Extremely easy to operate, the SD500-PS/PSDA provides a fast and practical means of manually initiating a fire alarm signal. The IntelliKnight panel recognizes each manual pull station by its specific address saving precious seconds in determining the location of an alarm. The SD500-PS/PSDA mounts to a single gang box and features a rugged metal construction that lasts and lasts.

Combine all this with the features you've come to expect from Silent Knight - easy installation and stable operation - and it adds up to a flexible solution for all your fire protection needs.

The SD500-PS/PSDA single action pull stations are operated by a pull on the front pull cover of the station. A plunger switch, wired to a self contained addressable module, is released as the pull station opens to initiate the alarm. Once operated, the cover hangs down and can be seen up to 100 feet away. The pull station is reset by returning the front cover to the normal upright position and relocking the station with a reset key. The reset keys are the same keys used on Silent Knight enclosures.